On offense, FRAG/MENT should be used to clear corners before advancing onto the site.

On defense, FRAG/MENT can be saved to prevent the enemy from planting the bomb.

On offense, FRAG/MENT line-ups are used for advanced KAY/O players to cover tricky areas to otherwise check or clear.

On defense, advanced KAY/O players will use FRAG/MENT to zone out attackers’ advancements.

Description: EQUIP a flash grenade. FIRE to throw. The flash grenade explodes after a short fuse, blinding anyone in line of sight.

Effects: The blinding effect is via line of sight so KAY/O cannot blind enemies through walls like Breach. Instead, it must be used like Phoenix’s Curveball.

On offense, FLASH/DRIVE should be used before entering the site to buy some time to locate defenders’ positions.

On defense, FLASH/DRIVE should be used before taking duels at long ranges or when retaking the site.

On offense, KAY/O should use the ALTERNATE FIRE option to underhand the ability causing the detonation to occur faster. This makes it quick and easy to flash around a corner and immediately charge before the enemy has time to react.

One defense, advanced KAY/O players will use the FLASH/DRIVE audio cue that enemies hear to bait them to fall back from their positions. Doing so can result in them being in poor positions for defending the site and make retaking the site much easier.

Description: EQUIP a suppression blade. FIRE to throw. The blade sticks to the first surface it hits, winds up, and suppresses anyone in the radius of the explosion.

Effects: After a short delay, the blade explodes, suppressing enemies in the radius and advising KAY/O of the enemies suppressed within its radius.

On offense, KAY/O will use ZERO/POINT to zone areas before entering a site.

On defense, KAY/O can use ZERO/POINT to check if enemies are waiting in an area before retaking the site.

A more advanced use of ZERO/POINT is to combine its effects with his other abilities. On offense, KAY/O can throw the blade behind typical defending positions and immediately FLASH/DRIVE around the corner. This forces the enemy to hold the position to not be suppressed and either be flashed or turn and be vulnerable to the entry fragger.

On defense, KAY/O should combine his ZERO/POINT with his FRAG/MENT. In certain positions, while defending, KAY/O can also throw the ZERO/POINT behind enemies forcing them to hold their position, and immediately follow up with FRAG/MENT. This combination either forces them to retreat to be suppressed, push through the FRAG/MENT onto site prematurely, or sit in the FRAG/MENT and take massive amounts of damage.

Description: INSTANTLY overload with polarized radianite energy that pulses from KAY/O in a massive radius. Enemies hit with pulses are suppressed for a short duration. While overloaded, KAY/O gains combat stim and can be re-stabilized if downed.

Effects: While overloaded, KAY/O has 15% RapidFire and applies a 4 second suppression per pulse. When downed, KAY/O has 850 health.

On offense, KAY/O’s NULL/CMD should be used when entering sites. His suppression makes it easy to infiltrate the site and the RapidFire buff makes duels easier for him.

On defense, KAY/O should use NULL/CMD when re-taking sites with an ally. If he can get onto site and trade 1-for-1, his ability to be re-stabilized if downed makes it easy for his ally to follow-up and prevent KAY/O from being killed before re-stabilizing.

A great trick on offense is to NULL/CMD when entering the site from a separate angle than his allies. Not only does this draw the attention towards him, but his suppression will also make it easier for his allies to win fights and while downed, he can buy more time for his teammates to push successfully onto site.

On defense, a trick advanced KAY/O players use is to NULL/CMD to suppress enemies channeling abilities. This will cancel out their ability rendering them useless. This is extremely effective when the audio cue for Raze’s Showstopper is heard and she approaches the site KAY/O is defending.

Basic Strategy for Pistol Round

A basic strategy to pistol round defense on KAY/O is to buy two FLASH/DRIVEs or a FLASH/DRIVE and a FRAG/MENT. Having two FLASH/DRIVE is more consistent but having one of each can offer more creative opportunities in the pistol round. Either way, having two three abilities to use on defense is handy!

On offense, KAY/O should look to pickup the Ghost and one FLASH/DRIVE. With this combination, KAY/O can easily be the entry-fragger to lead his team onto site. With the Ghost in hand, he should have enough firepower to win-out on first contact or at least trade.

Basic Strategy for Economic Round

On defense, KAY/O’s abilities are very important in economy rounds. Therefore, KAY/O should always prioritize buying his abilities. Depending on the number of credits available, KAY/O should prioritize Light Armor and a close-quarters budget weapon like a Spectre. This allows KAY/O to be the entry fragger for the team or play the infiltrator position well too.

On offense, KAY/O should look to use his utility to split the enemies and make it a more even round. If KAY/O wishes to push a site with his teammates, he can use his utility to flush out enemies in tricky defensive positions that would normally be too difficult to clear in an economy round.

On defense, KAY/O should purchase all abilities, Heavy Armor, and a Phantom. KAY/O can choose to either play aggressively and push out of sights to force mistakes or play passively and stall for time with all his abilities. Generally, for basic strategies, the second option works more consistently!

On offense, KAY/O should purchase all abilities, Heavy Armor, and a Phantom. With this loadout, KAY/O can easily ALTERNATE FIRE a FLASH/DRIVE up in the air behind him as he peaks to flash enemies holding the angle and not be flashed as the FLASH/DRIVE is behind him.

Advanced Strategy for Pistol Round

On defense, advanced KAY/Os will prioritize two FLASH/DRIVEs and a FRAG/MENT. This gives KAY/O access to all his utility which is incredibly potent at slowing pushes and picking off kills. KAY/O should position more aggressively in the site to listen for any cues of enemies and use his abilities accordingly.

On offense, advanced KAY/O players prioritize a Ghost and a FLASH/DRIVE. This gives KAY/O the lethality he is looking for when peaking after a FLASH/DRIVE and at longer ranges that is necessary for playing around certain maps and sites.

Advanced Strategy for Economic Round

On defense, KAY/O should prioritize his abilities if possible, while still getting a decent budget weapon. KAY/O should always prioritize a FLASH/DRIVE over FRAG/MENT and a decent weapon like a Judge or Spectre over a second FLASH/DRIVE and Light Armor. Advanced KAY/Os will position aggressively in the site and use their abilities to stop the rush from enemies that know they have the buying advantage. This will buy time to gather information and can lead to kills with a well-timed suppression from the ZERO/POINT.

On offense, advanced KAY/O players will quickly respond to any action nearby. In economy rounds its very difficult to win after a teammate dies without getting a trade kill. As such, KAY/O looks to immediately provide his utility where the action is to minimize the chances of an unanswered kill. KAY/O should prioritize his abilities and a Spectre.

On defense, KAY/O can use his NULL/CMD to push out of a site and force enemies to play to other areas of the map. With back up from a teammate or two, KAY/O can easily force enemies into positions where they can be pincered or where he can trade himself (downing him) for a kill.

On offense, KAY/O should look to use NULL/CMD to push onto site after ZERO/POINT detects enemy presence. This combination can suppress enemies for long enough the site should be easily taken, but KAY/O can continue to push that advantage until he gets a kill or two and eventually is downed. With backup from teammates, this strategy can result in one or more kills with no deaths, practically winning the round in the first fifteen seconds.

KAY/O’s kit is very versatile and perfect for adapting to the flow of the round! He can easily be the difference in denying advantages from opponents with a well-timed NULL/CMD, or by zoning enemies from areas of contention with his ZERO/POINT or FRAG/MENT. KAY/O has a lot of options when he has access to all his abilities and can take on different roles depending on the makeup of his team! He can simply be the Infiltrator, developing and executing the strategy for taking neutral or enemy ground, or even act as the first point-of-contact with enemies with his FLASH/DRIVE or via trading with NULL/CMD downing him instead of outright dying! Regardless of the role KAY/O is filling on his team, players must be vocal and communicate their course-of-action if they want to use KAY/O to full effect on the battlefield!

“We have one job; save this Earth. No excuses” 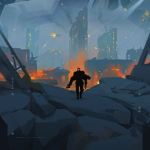